Hi All,
So after many years of the shock absorbers doing precisely nothing I have decided to have a look at them. Have started with the front which came off ok which is a good start. As you can see in the photos I have found a period advert which shows they are a Smith Single Acting Shock Absorber. There is also a photo of my unit that I have removed.
So has anybody overhauled there units or had them overhauled by somebody else? The shock absorbers themselves are not functioning and the bushes on the end of the arms are also very worn so will need replacing too.
Any ideas?
Thanks,
Stuart. 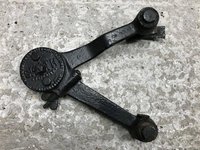 Hi Stuart,
You could try vintage and classic shock absorbers http://www.vintageandclassicshockabsorbers.co.uk/ Although the website does not mention smith S/a He may know a repairer.

Thanks Mike.
I'm not sure they are viable to repair as they seem very worn but that might be the only option open to me. Thank you for the info.
Regards, Stuart.
Top

Hi All,
I have finally completed the overhaul of the Smith shock absorbers on the Rover and have made a short video on You Tube showing the process. Thought it might be useful to someone.

Stuart
Thanks for sharing your video of your damper refurbishment. I had not understood how these worked previously nor about the inclusion of friction material. But it sounds like this knuckle was packed with grease and so the friction action would be compromised. Have I got that right? How often would that need redoing and adjusting?
Not that my dampers are that old. I have just had 2 1939 Girling Luvax dampers refurbished and they came back nearly twice the quote. I hadnt realised they needed topping up on a regular basis and were bone dry and had been for decades probably. I have not seen any instuctions anywhere so your video should prove invaluable to some owners
Rob.
Top

Hi Rob,
They work well when on the bench and have much more resistance on the rebound than on compression due to the outer band wrapping itself around the inner in one direction and opening up in the other direction. I can imaging that without lubrication the friction material would wear out very quickly while in use. I have been unable to find out what exactly the 'Absorbite' that is specified in the handbook is?? The adjusters make a big difference as you tighten them so is the end result is a big improvement on the rattly state they were in before.
Out for a test drive this afternoon so expecting the handling to resemble a Formula 1 car,