I'm writing this just as a statement of how I've found these carburettors. Someone else will have a different experience but this has been mine. Firstly, the only oil in the Rover SUs should be a little lubrication through the top oiler on the piston body. I've been trying Marvel air tool oil because of its non gummy properties. 25 years ago I had two Rover 14s, a 1939 car and a 1947 car, virtually identical apart from the SU/Solex carburettor. The 47 car was the reliable faster car. The 39 one was the first of my experience of an SU carburettor sticking shut. This usually happened at a moment of greatest public humiliation, going slowly in traffic then having to go up a sharp hill with something large a foot off the back bumper. Would that piston move off its shut position ? Not a chance. If I could have stopped a moment and blipped the throttle it would have but there it obstinately remained until the top of the hill and it was off like a rocket.

Move forward five years and I buy a really nice extremely well restored 1939 12. Excessive sums had been spent on its restoration in all departments except it did the same. Although it was a good car in many respects, I decided that I wouldn't be keeping it forever really just on the basis of that one aspect of its operation. About six years ago I bought a 1947 12 with the Solex carburettor. No problems, very reliable. I also have a 1937 10 with an SU, again, the subject of properly documented restoration and it needs the occasional "blip" to keep it going properly particularly after a period of non-use although I think the Marvel oil is helping. I've also two 14s with the Solex twin choke carbs and all seems well with them once adjusted properly.

Provided the Solex jets are kept clear and the tickover air adjustment is properly set, I think they are ok and I say that as a fairly keen promoter of the SU carburettor in other side draught applications. I appreciate that there are people who think the Solex is a crude instrument in comparison but then I think it was Henry Ford who was asked if he thought he could make a better carburettor than the SU and he replied that if he was given two tin cans he could make one that worked better.

I think the MGs and Wolseleys with the downdraught carburettors were more successful because the chances of both carburettors sticking at exactly the same moment must be pretty small. Over time I have come to think that there is an affliction which affects long stroke 1500cc engines, three of which I have just now, namely the Riley 12hp and Rover 12 - both 69x100,and Triumph's later 1500 of 73.7x87.5. They all appear to suffer from a lack of go compared with what their owners would like them to have. Even the latter with twin carbs seems somewhat pedestrian and Riley 1.5 litre twin carb conversions command a premium. The Rover and Riley engines could probably have done with about 1600-1650 ccs to meet the owners expectations especially as bodies and equipment became ever heavier but of course the punitive HP tax rating hampered British engine design for decades.
Top

Good points raised there! I must confess that my earliest experiences of the SU was back in the early 70s with my older brother’s Morris Minor and subsequent Austin Healey Sprite; both side draft carbs and subject to poor running if the dash pot was allowed to run dry of oil. By comparison I had a Ford Cortina GT with a 28/36 DCD Webber carb, which seemed so much more advanced. Greater economy was available if one could resist hard acceleration but when the need arose, as it did to a 17 year old, the available performance was a step change to all BMC type cars with a real kick in the back as the second choke opened! My brother changed his Minor for a Corsair 2000E and, boy, was that a quick car. It had a twin choke 32DFM Webber, if I remember back correctly almost 50 years ago.
The principle of twin carbs, whereby the closer feed of fuel via shorter inlet manifolds giving greater efficiency, made complete sense and I have this set up on my Rover Tourer. However, the power delivery is most definitely under whelming in the same way it was with the 60s BMCs, by comparison to the twin choke Webber. Perhaps it is simply the more progressive delivery of the twin SUs that makes hard acceleration seem uneventful.
Back to the point made; perhaps the sticking piston of the Rover SU described, was due to the downdraft operation and the lack of an oil filled damper? After all, side draft SUs became the more common fitment and I don’t recall the many Minis, Sherpas and Morris vans I drove ever suffering from sticking pistons. They all had a lack of power, but that was the design of all things BMC in those days and, hence, the preference for Anglias, Escorts, Cortinas and Transits over their homegrown competitors. Happy days!
I believe the Police spec Rover 10s and 12s used the same side draft SUs and inlet manifolds as the triple carb 14s, so probably a better arrangement.

Great memories Tony, just the way it used to be!!

As I understand the principle, the only point of contact between the piston in an SU carburettor and the body should be between the inner face of the inner tube on the body and the outer face of the piston tube. There shouldn't be any contact between the piston disc and the body but there should be next to no gap between the two, thus providing the area for the manifold depression to act on and suck the piston upwards. This works well on the side and semi side draught carburettors because the force of gravity applies either equally in the former and fairly equally in the latter to the rising and falling piston so wear is minimal.

The same, unfortunately, doesn't hold true with the downdraught SU where the pull of gravity on the piston is all downwards , or maybe more accurately, sideways on the piston rod. The hydraulic damper was introduced in the early 50s to try and eliminate sudden movement of the piston upwards when the throttle was suddenly operated which would lead to an over rich mixture, more of a concern at the time because of rising petrol prices (how unusual...). Earlier carburettors didn't suffer from this because the pistons were made of brass and so they had sufficient weight in them to balance with the manifold depression more effectively but the aluminium pistons necessitated both a spring and the hydraulic dampener to give the more equal performance previously found with the brass pistons and also to try and improve upon it. I don't think there were any applications of an SU pre war which needed the spring pre war other than the D3. The only oil needed in any pre war SU is to lubricate the piston rod which is solid.
Last edited by SHyslop on Mon Apr 04, 2022 12:36 pm, edited 1 time in total.
Top

Thanks for that information.
Priority at the moment is to get back on the road! The SU can wait a bit!
D
Top

The restored carburetor has arrived yesterday, see before and after pictures.
There is no damper.
I opened a discussion on Facebook and Goeff Meller argues there the following: "The SU with horizontal slide chamber does have an inherent tendency to bind, and to wear oval, obviously due to the weight of the slide lying on its side. Worse still if attention is not paid to the supply of clean air!".
I am going to test the carburetor on my test engine and compare it to a self restored Solex. 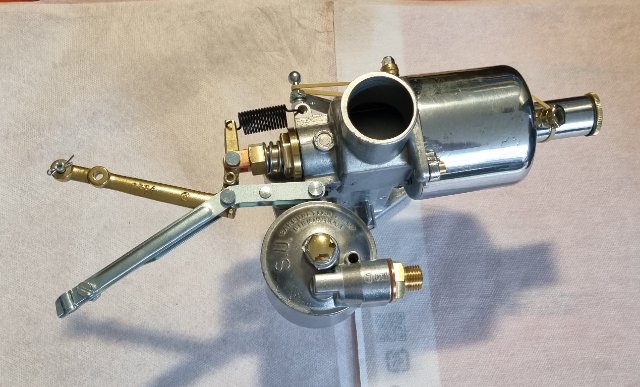 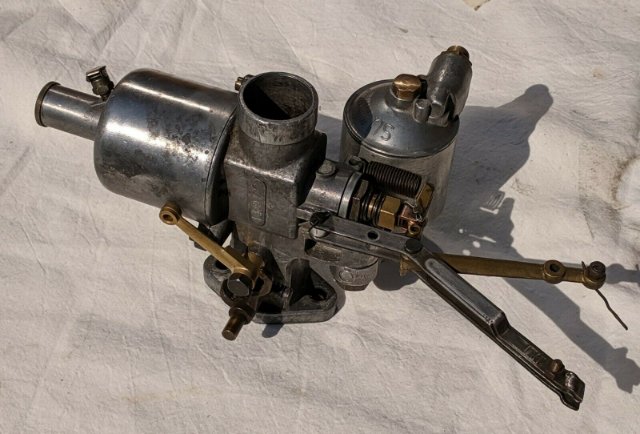 Looks very nice and it will be interesting to hear how it compares.

A small point; I notice that, during the rebuild, the mixture control lever has been mounted onto the opposite side of the carb. An easy mistake during reassembly, but it means your mixture cable will arrive onto the wrong side and also there is nowhere to mount the throttle lever cable as the only place now has the mixture return spring in it. A simple matter to swap around but I thought I’d mention it to save you puzzling over what is wrong!

Update: I installed the S.U. carburetor on the test engine. That was straight forward and improved my understanding of this carburetor. The engine started immediately. It runs nicely, but it is too early to decide which one is better, if at all.
This engine is fitted with a 123 distributor with digital ignition advance. I attache two videos: one audio/visual and the other monitors the, rpm, manifold vacuum, advance angle and temperature.
https://youtu.be/feFuelnpXFY
https://youtu.be/HGdGk0Xo4d8
Rover 10 1946 RHD
Rover 10 1947 LHD
Rover 12 1947 tourer LHD
http://lulisml.wordpress.com/
Top 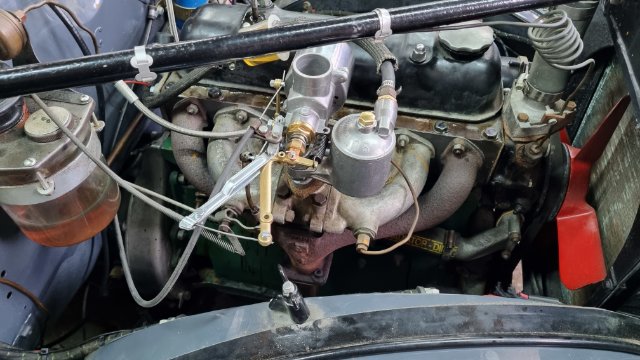 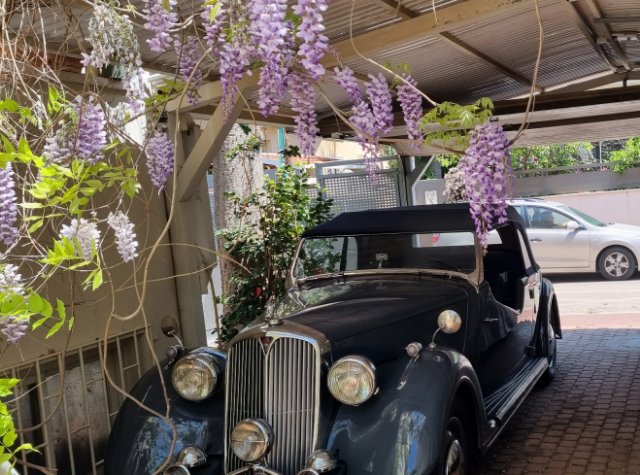 I developed a blow from the exhaust manifold to head gasket. so had to replace it. Not too difficult, but pulling the manifold clear to replace the gasket was a bit of a squeeze as the downpipe fouled the steering box...and to make it easier I really needed to split the pipe from the manifold.
Of course there were only three studs & all absolutely solid! However before attacking this I thought I would fit my used Rover 10 D/D SU.
Looking at the SU book the 10 & 12 used identical carburettors. It and the throttle links fitted easily...choke cable needs work & I seem to have a spare mounting for another Bowden cable...no idea what it adjusts/does! Anyway I switched on. tick., tick, set the choke by hand and...off she went! A bit rich, bur very smooth. Not bad for an old carb that hadn't worked for 40+ years! I won't use it on my trip to Luxembourg etc, but will stick to the Solex for now.
I then managed to separate the manifold / pipe flange and now my spare exhaust manifold and the original complete manifold assembly are with a machine shop being fitted with four new studs each. Fitting a new system should be a walk in the park....!
Top

Got the manifolds back with new studs fitted into heli-coils. Nice job, the faces had been cleaned up as well. All fitted together...bottom clamps fought back, but all together now and the Solex is back on...stared first time! I think the car has been running a bit rich, so (following the workshop manual!)
I had a play with the mixture screw. It was not as easy as the manual made it sound, but I think I have a reasonable setting. I did the initial setting like I did with the Zenith on an Austin Seven...screw it right in , back off one and a half turns and take it from there- Any one have a better idea? I will see how it goes on the trip up to Nottingham to see Gough's to have a new pipe & silencer fitted.
David
Top
Post Reply
23 posts