Out for a test drive the other day I came off a roundabout seeking 1st gear and the gearchange jammed solid - no drive. Eventually I thumped the gearstick back into neutral and was able to get home gingerly. On uncovering the gearbox I found all 4 bolts J23 holding the gear change remote control housing J1 were loose! Naturally I tightened them up but could see no way of checking the adjustment. Doesnt seem to be mentioned in the manual either. (At the same time I saw oil had leaked out of the gearbox filler cap F68. The bolt for the clip holding the cap down F70/71 was also loose and the cork seal F69 in the cap pretty squashed. I only mention this for completeness I dont think it is relevant). Anyway I topped up the box and hoped I had fixed the problem but since then the gear change has got more and more difficult ie refusing to go into the chosen gear, especially 1st and 2nd. I did take the UJ cap J14 off the gearstick and thoroughly lubed the ball and also adjusted the freewheel cable P24-26 but that was an aside.
Can anyone suggest where I can adjust either the gearchange or box to get it working smoothly again- a major trip next month is looming up fast!
Top

Check the rubber support between the gearbox and crossmember is in good order. They go soft and collapse with age/oil contamination and cause the symptoms you describe 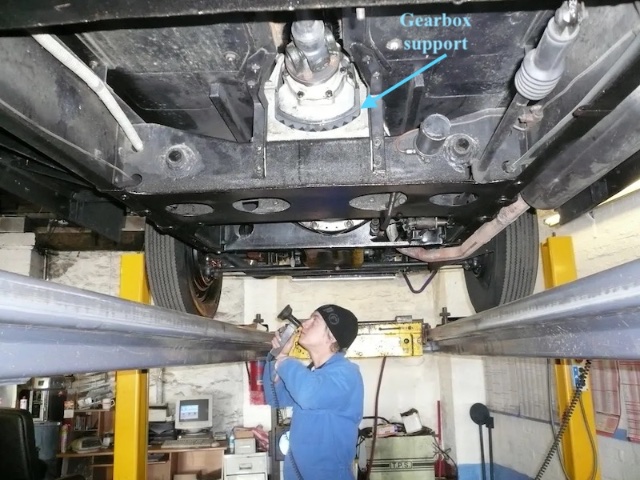 Thanks Luli and 47P2 for your assistance.
I feel a bit dumb now beacuse having studied the pictures I can see the slotted holes in the gear change gate are obviously for adjustment. Rereading the workshop manual more carefully I see it does flag up that refitting the UJ cover on the stick you should avoid nipping up the springs/bolt shoulder and inhibiting the plate movement. So I shall get onto that as soon as I have the current job done. I hadnt considered the rubber mount as a possible culprit but I had better check that as well!
Rob
Top
Post Reply
5 posts • Page 1 of 1