I finally bought a hide (yes a whole hide- no choice about that) and the leather worker started on reupholstering the front seats. The first was fine when opened up but the second has exposed some serious woodworm damage. Fortunately it seems to be almost confined to the very bottom of the back where it disintegrated into dust. This part seems to be a infill piece of ply about 3-4" high from the bottom - almost as if it has been patched previously. However the other seat was the same so I figure it is original. The problem is that all the ply is shaped and curved. My question is - does anyone have a template for the back of the seat or if they have refurbished this type of seat where could I get such parts?? Desperately need to know because all work has stopped and it was incredibly difficult to get it started in the first place- took about 6 months after I accepted the price!
I will try and upload a couple of pictures 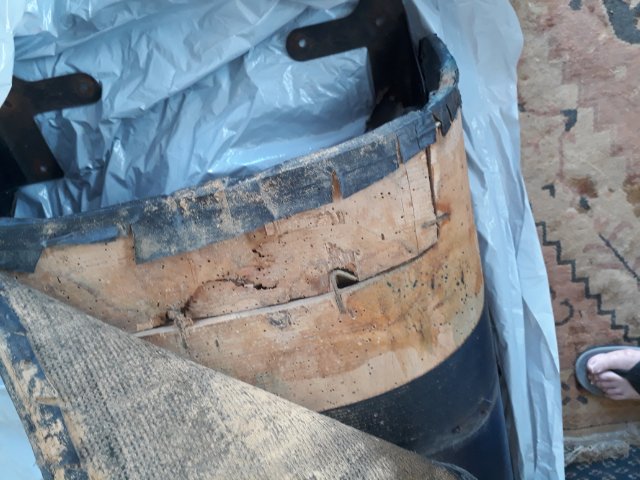 Have you spoken to Mike Evans or Mike Couldry who may know of a source or someone who can steam bend the ply?

Hopefully, one of the Mikes will either know where you can get new seat backs shaped or have some second hand seats that could be used. However, I fear that good secondhand ones will be hard to find now as they will either have been attacked by woodworm or will have flattened out, making the top of the seat backs too wide. you will also require seat backs that can be used to tip forward. The saloon seats don't do this and Im not sure if the backs would be strong enough without the metal at the bottom that the saloons have.

I had exactly the same problem as you when I went to get the seats in my Tourer re-upholstered. That was six years ago and I was unable to find any old seats then. I contacted various companies who undertake plywood steam shaping, but none were interested in creating a mould to do just two. The first thing I did was make a 'buck' to bend plywood around. I thought that using a number of thin sheets might work, gluing them together as I went and creating a steam tent using a wallpaper steamer. Needless to say, it didn't work and the sheets of ply simply went straight again when I removed all the clamps. Ironic that ply always bends when you don't want it to, but no chance when you do!

I also looked on line and around local furniture stores/charity shops to see if there were any 'tub' chairs that I could repurpose for my car. No luck there but I mention it as an idea worth following up, hopefully with more success.

In desperation, I got working with a blow lamp and some thick steel bar. I bent up four curved pieces of steel (the shape the seat back needed to be) and then used two for each seat and welded three uprights between them to create a sort of half basket arrangement. Then I took some thin ply, cut to the correct shape of the seat back, and riveted it to the inside of the steel basket. On the outside I cut pieces of softwood and shaped the edges so I could stick them to the ply on the steel frame side creating a kind of barrel. Once the glue had hardened, this was smoothed off and another sheet of ply was glued to the outside and clamped together. Once dry, the seat was shaped and the back was ready to cover. Instead of the original hinges, I used the ends of the bottom curve of steel bar, bolted through to some strong brackets on the newly made seat bases.

It sounds highly involved and difficult to convey in a post, but all the above happened in less than a week as I had to provide my upholsterer with two seats to cover within a tight time frame. On reflection, It may have been possible to fabricate the seat backs from fibre glass or from sheet steel curved and reinforced around the edges, like a section of a steel oil drum. 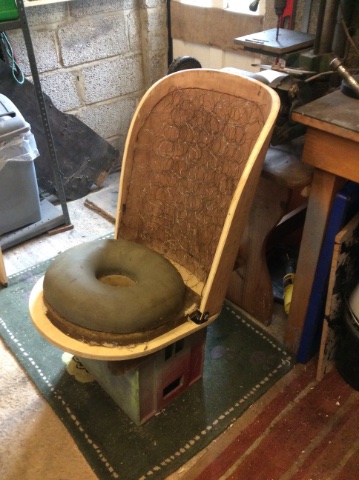 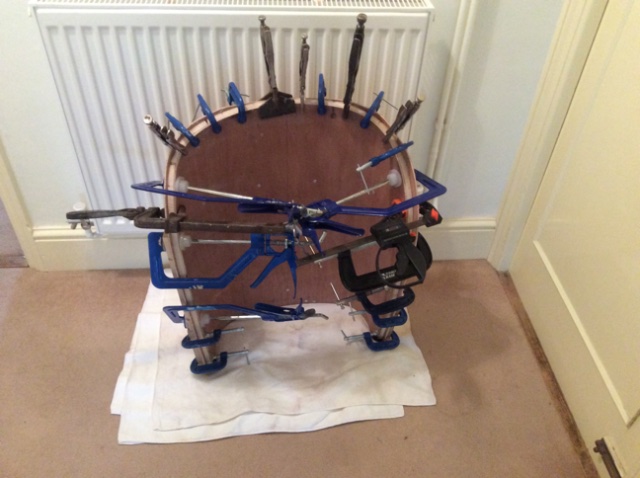 Hope that helps a bit. To be honest, it was one of the most challenging aspects of my car restoration.

As it's just one seat and only the bottom section, I think you could remove the in-fill section and treat the woodworm in the remaining ply. It will need a good soaking - had the grubs falling out of my seats, not nice! Then get some sheet steel curved to the correct shape and fitted around the inside, suitably bonded and screwed to the ply wood. Then, do as I did and infill with shaped sections of wood, glued and bonded into place (loads of great glue products in Screwfix like Sticksall etc). Once complete, shape and fix a second piece of steel around the outside. Once covered, it will be stronger than the original. You could use sheet aluminium, which is easier to work with, but not as strong.

Thank you all for your generous advice. It sounds as though I am going to be forced into a DIY solution although I will try the Mikes just in case they are into miracles. Another steep learning curve - a choice between bending ply or bending sheet metal!
By the way anyone any idea why that bottom slot was a separate piece and fixed in with staples? I did wonder whether it was for a foot space for the rear passenger which was only filled in on some models (this was the Tickford version). Although mine has a flat floor it should be a sloping metal tray - when I get around to fitting them. Has anybody seen a slot for foot space like that?
Top

If most of the seat back is ok, I’d go for the sheet metal option. Thin gauge steel or aluminium is easy enough to bend by hand to shape around the outside. If the construction of the seat back and base allows, maybe you could brace the bottom curve with a thicker bar of steel or tube, bent to fit inside the seat back. Then it’s a relatively simple matter of filling the gap from the inside, perhaps with P40 filler and then fibreglass the inside to cover the whole lot and provide additional strength.

Given that the seat back hinges at the base, I’d be surprised if the seats were designed with cut-outs as this must weaken the structural integrity. However, the coach builders may have modified fixed seats used in a Saloon of some sort, perhaps with a fold out foot rest or picnic table. I’m sure that each car they built will have been different in a number of ways depending on customer requirements and/or availability of materials. Or perhaps the seats in your car were repaired with bits cut from a donor seat? It would make sense to let bits in and avoid having to reupholster the seats.

It sounds like your floor should be more like the pre-War floor in my Tourer than the post-War 12 Tourers that seem to have flat floors, like the saloons. I think the lowered metal floors give greater leg room but maybe the early cars had shorter wheelbases.

Hi Tony
Mine is a 39 DHC 14 so definitely different form the tourers. Picture of the footwell trays in my spares attached - a bit lacy but mostly sound. My hesitation is just that after repairing them and fitting them the carpet wont fit any more and I am not quite ready to replace all the floor carpets 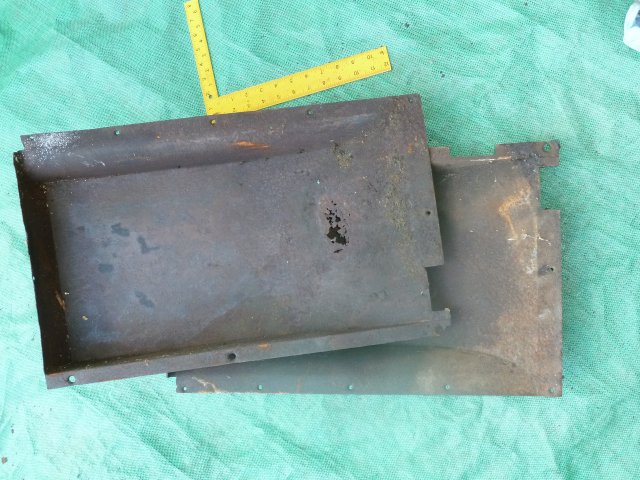 Good to have them in stock and ready to go when the time comes. From the picture they look very similar to the ones I removed from my ‘P1’ Tourer, although not the same. I assume the deep section sits at the rear of the car, like mine do, but the curved profile at the side top of yours suggests they are made to follow the curve of the outer floor board. That said, does your car have ash floor boards or was that a P1 only feature? While my floor has the curved edges, the foot wells sit below inside the chassis on the outside, supported by the tunnel in the middle. A good use of space to create leg room but a fussy arrangement with regards to construction, carpeting etc and bad for collecting water, which has no means of escape. Yours are a better design but a flat floor, like the P2 saloons, is better if there is enough rear passenger leg space.

Another suggestion, re your seat back, is to use some fine meshed steel sheet and fibre glass instead of normal sheet steel. Easier to shape and lighter, but should give you a lot of strength once the resin has set. Just a thought in case you haven’t decided what to do yet.